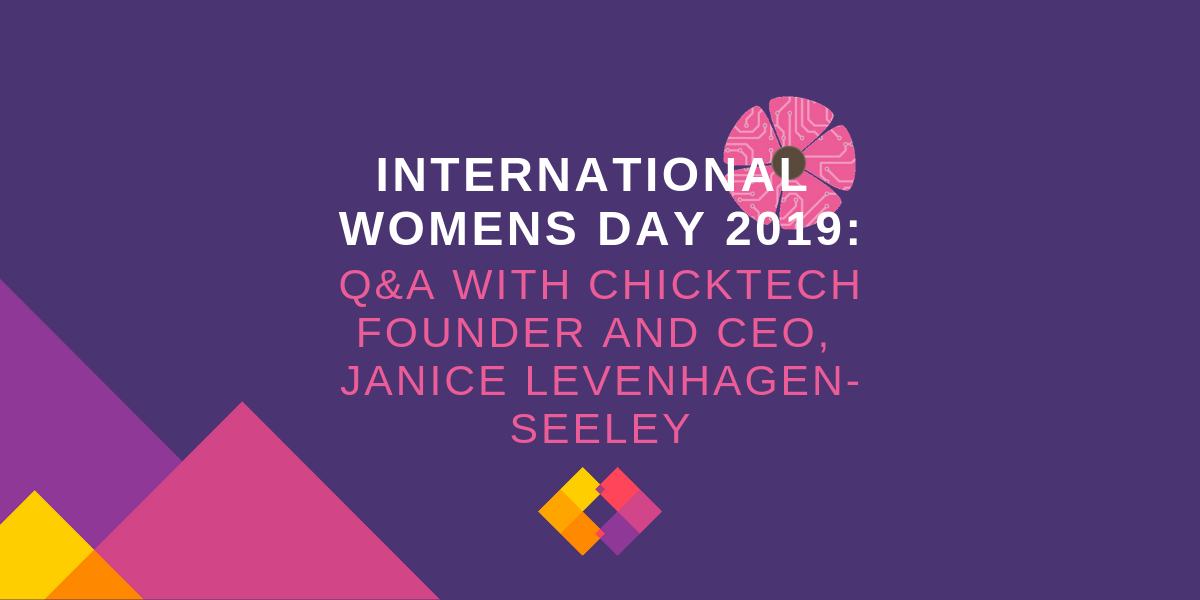 This year’s International Women’s Day campaign theme emphasizes balance. The 2019 #BalanceforBetter campaign focuses on building a gender-balanced world, bringing everyone together to help create a better working environment. While a gender-balanced world is important for every business, team, family, and collective group, it’s especially imperative for those in the technology industry. 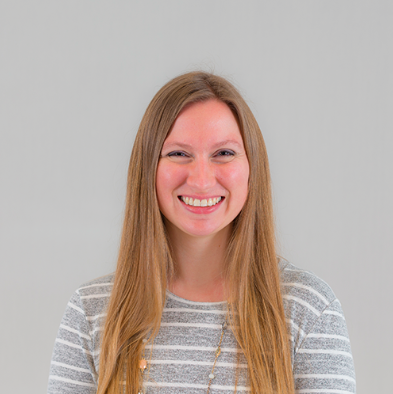 Unfortunately, it seems as though the industry is actually moving backwards in terms of gender equality. Over the past 27 years, the percentage of women working in computer-related occupations – one of the highest-paying and fastest-growing STEM fields – has dropped from 32 percent to 25 percent. This is exactly why this year’s IWD campaign theme is most important, especially to me, as an individual and female in tech.

To celebrate this year’s IWD2019, I sat down with Janice Levenhagen-Seeley, founder and CEO of ChickTech, a non-profit organization dedicated to retaining and growing the ranks of women in the technology workforce, to talk about her journey as a woman in tech and what the industry needs to do to change for the better.

Why do you think a gender gap still exists in the tech industry?

A gender gap still persists largely due to unconscious bias, which has been holding women back – particularly in tech – for a very long time. Unfortunately, the industry often treats it as an easy problem that can be quickly solved by simply talking about it and raising awareness. Paying lip service without putting your money, time, and effort where your mouth is doesn’t solve these systemic societal issues.

I also believe there’s still a silent majority that doesn’t believe this is a legitimate issue, and they’re acting as anchors—holding back progress. It’s not necessarily that they believe women are inferior; many just believe that if women are choosing not to go into tech, it’s because they must not want to—that women’s brains must not be wired the right way to enjoy tech. In their minds it’s a personal or biological choice. However, this mindset ignores the antiquated gender roles that led to that “choice”.

What are some of the obstacles facing women in tech, but not men?

Again, systemic bias is at the root of most of the obstacles for women in tech. For example, when you look at technical careers, people assume you have to be really logical—which is at odds with the pervasive stereotype that women are too emotional and talkative. According to a recent Women in the Workforce 2018 study, women also have to provide more evidence of their competence than men, and they have their judgment questioned more heavily in their area of expertise. On top of that, when people look at women, they automatically judge and hire them based on their current skillset, whereas men are judged and hired based on their future potential. And then there’s just the backwards belief that tech is a “male” job, which too many still unfortunately hold – even some women!

Why are diverse workforces better off?

What are the networking opportunities like for women compared to men and how has it set them up for promotions?

One of the things I’ve noticed in my own networking is that some women seem to be more cautious about providing opportunities to other women, which is unfortunate and disappointing. High-level women I meet sometimes view others as a threat to their position. And it’s not unfounded. If you’re the only executive-level woman at a company – especially the first – it creates a sense that there can be only one. That line of thinking doesn’t come from inside those women; it comes from company culture and society being willing to accept the token woman and not caring about true gender equality. They’re set up in a no-win situation.

Another issue that makes networking more complex is that men sometimes get the wrong idea when one of the few women in the room approach them to network—and/or they may worry that others in the room will get the wrong idea. The MeToo movement has brought some much-needed attention to harassment in the workplace; however, men occasionally become concerned that they may do or say something that will come across in a negative manner when it’s not intended that way. While this isn’t necessarily a bad thing because it helps them to think about how their behavior comes across, it can be taken too far when men distance themselves from women out of fear. In our society, men still hold much of the power, so not being allowed to connect with them leads to an uphill battle for women.

How can women find a mentor?

Women often feel isolated and alone in both technology and management, and a mentor is a great way to create and find paths to where you want to go. In my opinion, the best way to look for a mentor is to look for a friend—someone you’ll click with beyond a “formal” mentoring relationship. From what I’ve seen, the mentoring relationships that work best are the ones where people have things in common, find personal enjoyment in connecting as people, and build trust through that personal relationship. Connecting as people also means that the advice will most likely resonate better! 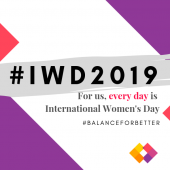 Here at Red Lorry Yellow Lorry, we love International Women’s Day and what it stands for. It’s a day dedicated to celebrating amazing women...

How is ChickTech working to close this gap?

ChickTech is both enabling school-aged girls to recognize their aptitude for STEM and helping women already pursuing these careers to overcome obstacles and navigate a pervasive culture of harassment and discrimination. We achieve this through our programs for young women with our summer camps and high school programs. One area that’s a big focus for us right now is bringing these opportunities to rural communities that don’t have the access to tech that urban and suburban communities have. We also have our professional chapters in 28 cities across the U.S. – and we recently launched our first international chapter in Toronto, with more to come!

How did your own experience in tech lead you to founding ChickTech?

As a young woman, I was never encouraged to pursue the technology field; I practically chose it at random. Early in my career with so few other women by my side, I had alienating experiences and faced a lot of challenges. I often experienced the lack of community and the lack of belonging while I was pursuing my engineering degree and working in the tech field, and left the industry altogether. Happy circumstances ended up leading me back to the industry and to founding ChickTech. I drew on my experiences growing up as a teenage mom in a rural community with few tech opportunities and as a woman in technology to make sure other women did not have to go through what I went through.

How can men get more involved to encourage greater gender equality?

This is a great question because we can’t achieve true gender equality without men. One of the simplest things they can do in the workplace is offer micro-affirmations – casual acknowledgements of a person’s value and belonging. These are small gestures that can have a big impact, and they can also serve as a way for people to change their own biases and serve as an example to others. For men specifically, it’s a way for them to remind women in the workplace that they belong and they’re great at their work – it also allows them to provide positive feedback. Micro-affirmations help heal the wounds that would otherwise cause “death by a thousand cuts” (as micro-aggressions are often called).

Outside of work, there are plenty of women’s equality organizations that welcome men. If you’re a man trying to get involved, it’s best to call up the organization first to make sure you’ll feel included. We welcome all genders at ChickTech events, but we still get a lot of men who are very nervous about being a part of it because they’ve had negative experiences with other groups. Personally, I’m excited to see the men who come to our events; I know it takes a lot of courage to step out of your comfort zone and go somewhere you may feel like you don’t belong, regardless of your gender.

What can businesses do to help increase the numbers and ranks of women in tech positions?

There’s been a lot of talk, but I don’t think the people in charge – most of whom are unfortunately still men – know how to solve the problem. Many of them still believe that merit dictates new hires and promotions, although that’s not always the case. In fact, fewer than one in four companies use tools to reduce bias when reviewing resumes, even though reviewers often fail to give equal consideration to women, people of color, and other underrepresented groups.

In general there’s a lack of progress because there’s still a lack of urgency in many companies. They’re typically operating “perfectly acceptably”; they look at their company and think, “Well, I guess we could get a better bottom line if we had more women according to these studies, but think of how much work it’s going to take to get there. We could spend that improving our marketing instead.” That kind of thinking has to change if we want to make true progress. Unfortunately, it takes a lot of education and a lot of listening to people’s stories over the years to convince them that it truly is something critical—and even then it’s not guaranteed. To make true change, there has to be a sense of morality and belief that part of our role as humans is to create fairness and equality for all—to improve the human condition and leave society better than when we entered it. When businesses (and leaders) are too focused on short-term gain, this gets left by the wayside.

What advice do you have for women looking to break into a tech career?

First, educate yourself on the things that hold women back. Before learning this myself, I internalized what was happening to me. When people were nasty to me or looked down on me, I assumed it was just me—that there was something wrong with me or that I shouldn’t be there. However,  had I better understood the dynamics behind the societal issues and belief that women aren’t as good as men, I would have been able to internally control my reaction to it. Being educated about these issues helps you look at things in a different light, which eventually allows you to push back and remind yourself that it’s not you. And second, make sure you have a community that will have your back and support you, so when you do come up against these issues, they’re there to say “Hey, remember it’s not you. You’re perfect, we love you, and you belong.”

How are you celebrating International Women’s Day? We’d love to hear from you! Follow us on Twitter and Instagram and let us know. Make sure you check out what we did to celebrate our lorry ladies too!

For more information on ChickTech, visit their website and sign up for their ACT-W Achieving Equity Summit. 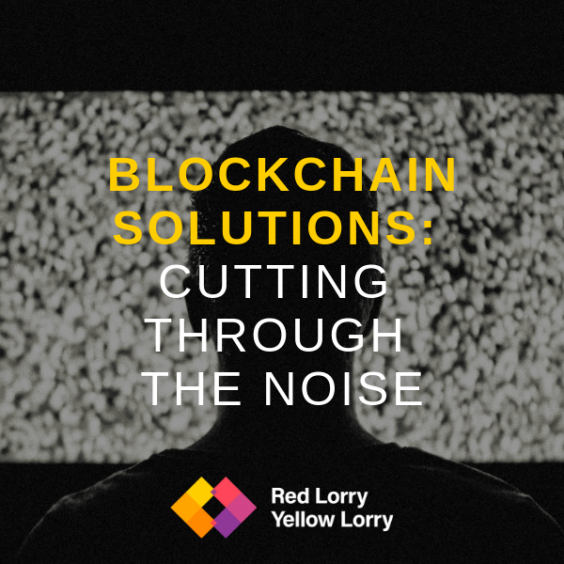 Blockchain solutions: cutting through the noise 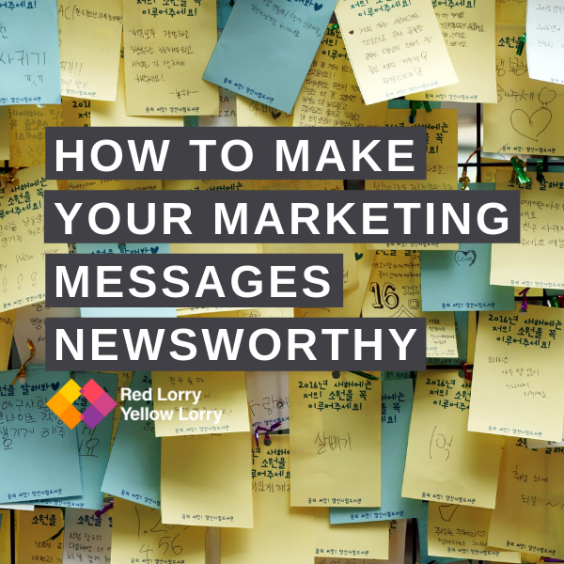 How to make your marketing messages newsworthy 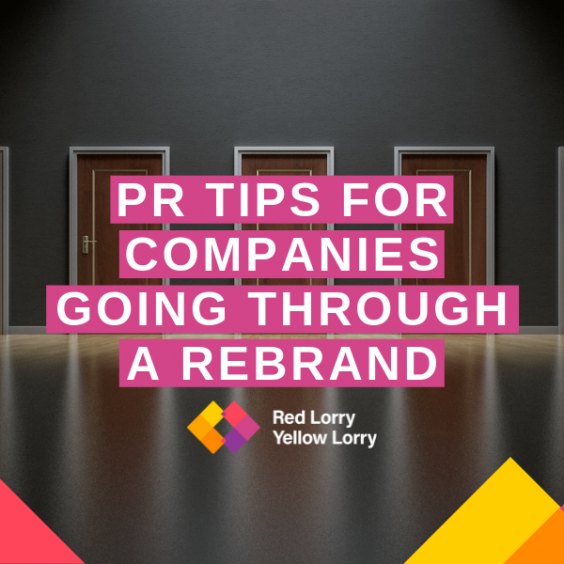 PR tips for companies going through a rebrand