Having already established a prominent position within the industry, Beamery wanted to make more of an impact on social channels. This required it to better engage its network of followers in order to stand out from the crowd.

Increased Beamery’s LinkedIn followers by 58% throughout the campaign, reaching more than 20.5K. The program generated an average of 656 new followers per month.

New followers came from Beamery’s target audience (culture/HR/people leads at large enterprises), including C-suite executives from brands such as Bank of America, IBM, Cisco and Nike.

Achieved the top SOV for Beamery against competitors with a majority stake of 46% in January 2022, an increase of 35% in the first eight months of the program.

Our social media program had two key objectives. First, to increase Beamery’s LinkedIn following to further elevate the brand as an industry leader for HR/recruitment among competitors. We were tasked with growing follower count by 350-450 per month. And second, to increase Beamery’s average monthly LinkedIn engagement rate to 4-5% in order to truly connect with the company’s followers and audience.

We started by shifting the focus of organic social away from Twitter and Facebook, designating LinkedIn as the primary channel. We implemented a social media calendar to help establish a regular posting cadence which would keep Beamery in conversations around HR tech and prevalent in followers’ feeds.

But we knew that written content alone wouldn’t cut it. So, our strategy centered around the creation of dynamic visual content such as videos and GIFs, led by our integrated design team.

We knew that dynamic content would spur higher engagement from users than text-based or static image posts. For example, we focused on cutting up long-form webinar recording into digestible 30-60 second segments, designed engaging images to accompany posts, and created infographics based on written content. This strong visual focus helped Beamery stand out on social feeds while promoting high-value educational content. 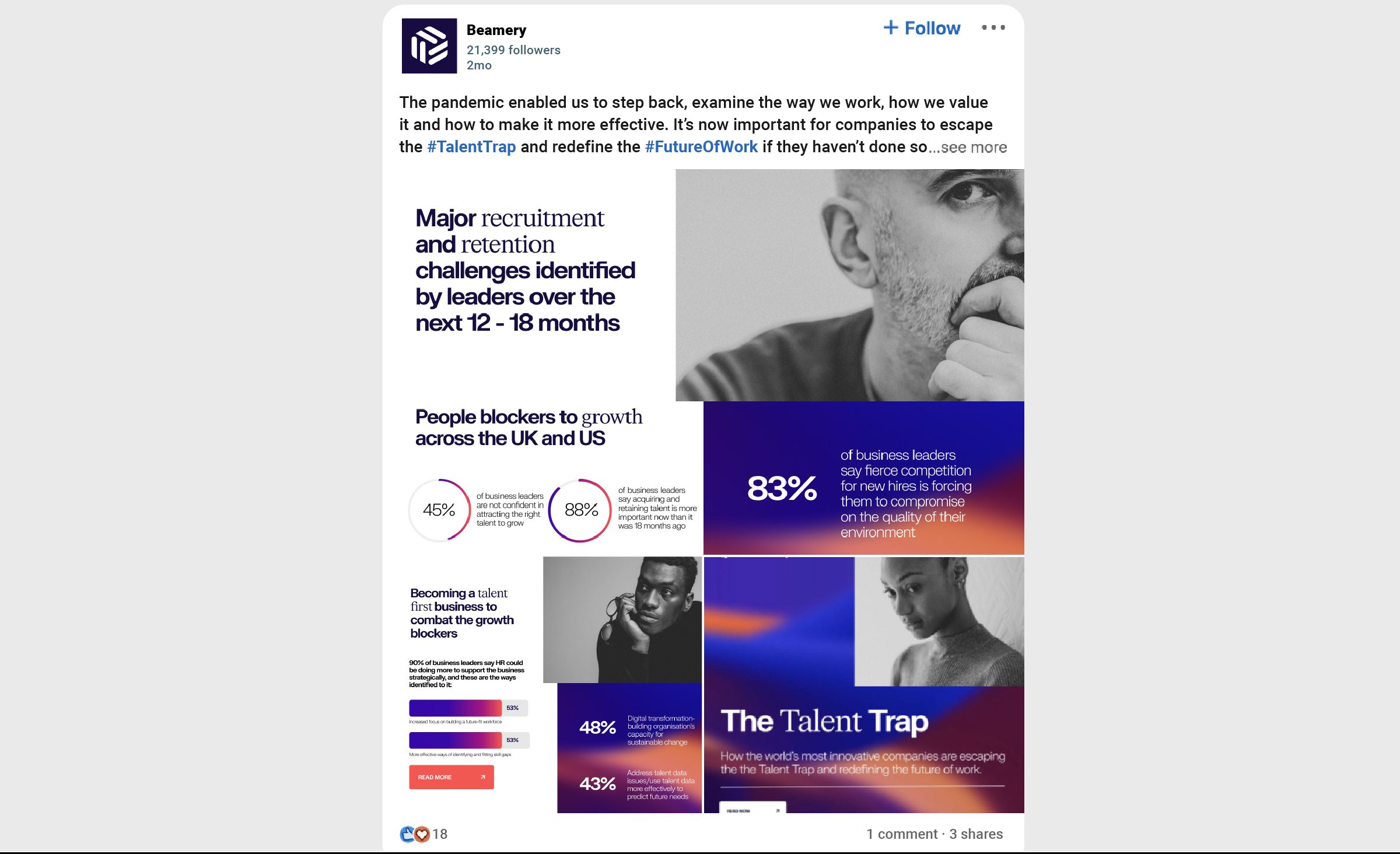 We also integrated engagement-oriented post formats such as polls and strong CTAs to encourage users to interact with posts as much as possible – whether liking, reacting, voting or commenting. This helped to maintain a strong engagement rate and ensure that the LinkedIn algorithm promoted Beamery’s posts. These LinkedIn posts were also repurposed for Twitter.

The lorries have been fantastic partners. I have worked with them on multiple projects over the years and when I needed help with our social media strategy and management, the team stepped in and did a great job. They supported all our needs, from helping craft the strategy to stepping in and doing the execution. They worked in a way that made it easy for me to provide input/feedback. During the time they partnered with us on this program, we were able to achieve our goals of increasing followers and engagement.